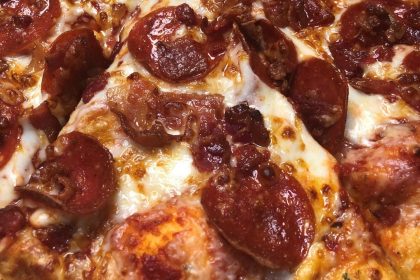 December 22, 2019 was the day that a simple pizza delivery would begin a series of events that would change two lives and influence many others. Weeks before Christmas Sunday in 2019, my husband, Pastor Denver Burns of Michiana Community Church in Granger, Indiana, began to challenge us as a church to bless a delivery person in an unusual manner. He told us of his plan to order a pizza on Christmas Sunday and to bless the delivery person with a tip that was over and above anything they could imagine.

Denver went on to ask each of us to begin to pray for three things. He asked us to pray about what God would have us sacrificially give, that God would send the right person to deliver our pizza on Christmas Sunday, and that the delivery person would know they were seen and loved by God through our actions.

While many of the church members at MCC were excited and couldn’t wait to see how it would turn out, there were also many skeptics. Even Denver was slightly concerned the pizzas would be delivered by a young man who would simply be excited about using the money to purchase a new Xbox and wouldn’t really be touched by the gift.

When Christmas Sunday finally arrived, there was a lot of anticipation. The pizza was ordered and we began the service by taking up the offering. After it was collected and counted, everyone was shocked and excited to find out there was over $850.00! The congregation was told that when the pizza arrived the service would be paused to present the gift.

During a time of praise and worship, the delivery person pulled up. She sat in her car for a few moments confused about why a church full of people would order two medium pizzas. I opened the door and waved and smiled to encourage her to come on inside. She seemed hesitant, but she smiled and brought in the pizzas and tried to give them to me. I kindly asked her to deliver them to our pastor and pointed through the sanctuary doors to where Denver was standing on the stage waiting for her. Her eyes grew wide and she asked, “Is he expecting me?” I assured her that he was and ushered her into the room.

The congregation was so excited. Once we stepped in the doors, they immediately began clapping as I led our delivery person to the front of the room.

Once we made it to the front, Denver paid for the pizzas and said that he had $80.00 to give her if she would just give him a few minutes of her time. She shrugged and nodded. Then Denver introduced himself and asked her name. “Jessie” she replied. Denver began, “So about four weeks ago, Jessie, we began to pray for you and asked the Lord if he would bring the person that He wanted to bless. And so we believe that God is doing something in your life. We don’t know that that is, but…”

And this point, Jessie interrupts and in tears says, “I was 29 months sober yesterday” and immediately grabbed Denver in a hug. The congregation began cheering and clapping in response. Denver encouraged her and told her that he would love to hear more of her story sometime.

Then Denver said, “We believe the Lord wanted to bless you. So, all these people have been praying for you. We didn’t know if you would be a man or a woman or a teenager or someone older. We just trust that God wanted you to be at work today and to deliver these pizzas.” Then he gave her the $80 and continued, “but that’s not all Jessie. You see, today when we got here we took up an offering and said we were going to give this money to whoever walked in the door. So, Jessie, with what I’ve already given you combined with what is in this envelope, here’s over $850.00.” Jessie immediately broke down in tears.

Denver went on to explain to Jessie that all of this was about Jesus. That we were at church to celebrate his birth. During this time, Jessie pointed out a cross ring she had and signified that she was a believer. Finally, as things wrapped up, Denver gave Jessie his card and asked for her to call him sometime in the future to share her story.

Just two days later, Jessie called. She explained that the gift given by the church was going to allow her to have a first real Christmas with her family. Her children had never had Christmas with a mother who was clean and sober and that now, because of the money given to her, she was going to be able to make it extra special by having the means to purchase gifts for them. Jessie also told Denver about how she had come to know Jesus as a child and was finding her way back, but was struggling because she had to work on Sunday mornings.

After that phone call, we didn’t hear anything more from Jessie. Then Covid happened. The church closed in-person gatherings and we began having online services only. Finally, mid-July, we were able to get back inside the building. On that very first Sunday back, a single woman snuck into the room alone after service had already started. I leaned over and told Denver that she looked familiar, but I wasn’t sure who she was at that point. It was difficult to see due to everyone wearing masks. After service, Denver and I stood at the door to speak to people as they left the building. The familiar looking women came up to us and even though we couldn’t see her mouth, we knew she was smiling by the joy lighting her face and the twinkle in her eye. She asked us if we knew who she was. I said she looked familiar, but that I was sorry, I couldn’t place her. She pulled down her mask and exclaimed, “I delivered a pizza here last Christmas!” At that point, Covid took a back seat and there were hugs all around.

Since that day in July, Jessie is an MCC regular. She’s a part of the family. Recently, Denver interviewed her during a service so that we could share more of her story with the congregation and Jessie had this to say about her new church: “I had been praying to find a church. A place to belong. Now, I have a home.” Jessie is still clean and sober and is excited to celebrate another Christmas with her family.

It’s a great story and we would be celebrating even if it ended there, but it hasn’t. Jessie is excited about her new home and has brought several guests with her on Sunday mornings. One guest is Laura, Jessie’s co-worker at the pizza place. After attending one Sunday, Laura reached out and asked for a meeting with Denver. Denver met with her and learned that Laura’s long-time boyfriend went to visit his daughter in Germany at the beginning of 2020. While he was there the borders were closed due to Covid. After being locked down in country for 8 months he caught the virus, became ill, and passed away. His family had the funeral and buried him in Germany before Laura even knew he was gone. After telling this story, Laura explained to Denver that she wanted to know if her boyfriend was in heaven. Denver told Laura that while we can’t know her boyfriend’s heart, she could know for herself where she would go when she died and shared the plan of salvation with Laura. Right there, in his office, Laura gave her heart to Jesus. She’s now a part of the family of God and is also a new and treasured MCC family member.

For four weeks we prayed, we took up an offering, and we ordered a pizza. God showed a former addict that He still saw her and loved her and He provided an opportunity for one of her co-workers to hear the gospel and accept Christ. God can and does use anything to further the gospel story.

And, if you’re wondering, the teens ate the pizzas. This year we’re calling Jimmy John’s.

2017 Annual Meeting – The Heart of the Leader