A couple of weeks ago I began sharing insights that I had gleaned from my recent sabbatical.  If you missed Part 1, go to www.indianaministries.org. In the last edition I wrote about what I thought was my key sabbatical takeaway.  This edition identifies three more insights.

Every leader needs a trusted and wise mentor to speak into his or her life.  When that mentor speaks, listen and take it to heart.  In 2004 through the Church of God Ministries SHAPE initiative I got acquainted with Al Ells of Leaders That Last (www.leadersthatlast.org).  God used Al to guide Cindy and me in making one of the most difficult decisions we had ever made – to leave the church I had been pastoring for the previous 25 years.  I expected our encounter with Al to be one and done, but God had other plans as over the last decade we’ve have had many opportunities to interact with Al.  It wasn’t long after initially meeting him that he designated himself my “mean friend.”   What he meant was that he was willing to be a friend who told me what I needed to hear, not necessarily what I wanted to hear.  Al also played a key role in my decision to return to Indiana as state pastor after a three year assignment in Florida.

While on sabbatical, Cindy and I spent three intense mornings (and a couple of meals) with Al as he meddled in our marriage and as we talked about my ministry and leadership.  There were several come to Jesus moments.  We met with Al during the first week of the sabbatical, and I ruminated over it for the next three months.  (Still am.)  It was definitely the highlight for me and has led to scheduling another day with him in the fall.  (By the way, On September 22 Al will be leading a workshop for pastors at the Indiana Ministries office.  If you are on a multiple staff church, bring the whole staff.)

We pastors can be so afraid to let people really see who we are for fear that they will think we are an imposter and have no idea what we are doing or because we are afraid they will use it against us.  Someone once told me they thought I ate self-confidence for breakfast.  The truth is there are times I am plagued by feelings of inadequacy just like others.  I’ve had to be willing to risk to let someone like Al have access to the real me.

Every pastor and leader needs someone in his or her life with whom they are transparent and who has permission to speak into his or her life.  I am a better person, husband, father, pastor and leader from having Al as a “mean friend” over the last 11 years.  And the time with him while on sabbatical was priceless and will impact me for the rest of my life.

My identity encompasses much more than the ministry role that I fill.  The first third of my sabbatical was a bit of a struggle for me.  I journaled about feeling unproductive and as I wrote I realized I was feeling depressed.  Isn’t that crazy?  I am on sabbatical and feeling depressed.

While being state pastor doesn’t have a whole lot of routine to it due to the travel and varied pieces of the assignment, each day I was working on meaningful ministry assignments.  But on sabbatical the routine was totally derailed and nothing was competing for my attention.  Some of my biggest daily decisions were what to eat and when to take a nap. Taking a break from ministry helped me realize that too much of my identity was based on what I did as a pastor.  When I wasn’t doing it, it was almost like I didn’t know who I was.

I wonder if this is part of the struggle that pastors sometimes have when they retire.  They are so accustomed to being involved in daily ministry that who they are and what they do have become fused.  And they aren’t sure who they are upon retirement.  Though I don’t really see myself retiring in the traditional sense of the word – at least not any time soon, there is more to me than the ministry I do.  And I need to be in touch with my full identity if I am going to experience wholeness.

Everyone is dispensable, and I am not as pivotal as I might like to think.   I’ve always believed that good leadership prepares people to make their own decisions rather than creating a dependency upon me as the leader.  Like most other leaders, I love it when people explain a situation to me and ask what they should do.  Providing the answer can really make me feel like people need me.

Often the most effective leadership is turning that question around by asking the person what their options are, and then helping them think through the impact of each option.  That empowers the person to make decisions in the present and the future.  Sometimes I do that… I empower people to make decisions.  And sometimes I fall victim to just telling them what they should do.

I am blessed with an incredibly gifted and skilled staff at Indiana Ministries, so never for even a moment was I anxious about the decisions they were making while I was on sabbatical.  I knew they would excel, and they did.  What caught me by surprise was that during the final month of sabbatical I began wondering if the staff needed me and if there was a place for me when it was over.  Please understand that is not a reflection on the staff, but on me.  I had been totally gone for two months and hadn’t had one email, phone call, or attempt to contact me in order to find out what to do about a situation.  I knew that if something really horrible had happened, I would have heard about it either through the evening news or some other means.  So no contact meant they were handling things and doing well and that Indiana Ministries was still in existence.  Maybe they didn’t need me.  Maybe I wasn’t as indispensible as I wanted to believe that I was.

The only indispensible person is the Holy Spirit.  No matter how effective you or I are as leaders, we are replaceable.  God can empower someone else to step in and lead.  Whether you are a lead pastor, an associate, lead a ministry organization or even lead a corporation, realize that if everything depends on you and if you are truly indispensible and irreplaceable, then you have done a horrible job of leading.  Wise and effective leaders do not create dependency on themselves.  They empower people to make good decisions and to lead in their absence.  That’s the kind of leader I want to be.

There is one more article I want to write related to a sabbatical.  Through Al Ells’ coaching prior to my sabbatical and through just good fortune, I did some things that prepared my staff and me to make the most of this sabbatical.  I’ll share those things with you in Sabbatical Reflections Part 3. 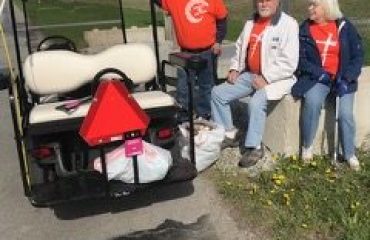