Sending Out Our Best

Sending Out Our Best

A recent article sent by Exponential (host of the largest annual gathering of church planters in the world) reports, “Missiologists say that to begin advancing on lostness in North America, we need to increase the rate at which we’re planting churches fivefold.”  Wow, increase by fivefold!  I often hear people say something to the effect that they think we have plenty of churches in the United States.  Granted, when driving around many areas of the country, one passes a number of church buildings.  But missiologists remind us that without more churches, we not likely to make forward progress in decreasing the percentage of lost people.

That reality concerns me.  Central to the mission of the church (small “c”) is increasing the number of Christ-followers.  Yet, as the population increases the percentage of Christ-followers in the U.S. is decreasing relative to the total population.  And without planting more churches, we aren’t likely to close that gap.

Do you know the Number 1 obstacle to planting more churches?  Funding might be your initial thought.  While funding for church planting is always tight, that is not the primary obstacle.  Rather, it is a lack of qualified planters.

The need to increase the number of church plants means that local congregations must be willing to send out their best leaders.  Unfortunately, the tendency seems to be to hoard our best leaders.  The rationale seems to be, “We need high quality leaders in our local congregation, so we had better hold on to our best.”  I understand the fear that leads to that conclusion, but if you are reluctant to give up your best leaders (i.e. paid staff and lay leaders), then the chances are that you are not developing new leaders.  When we fail to develop new leaders, we tend to tag the best as franchise players and guard them carefully.

Quality leaders are attracted to places where they can reach their full potential and maximize their impact.  They don’t see themselves as merely filling positions in an organizational structure.  They want to make a difference in as many lives as possible.  When they are tapped to merely fill a position, their leadership spirit often begins to wander.  Eventually, they either disengage though they may continue to fill a role or they gravitate to a new opportunity that challenges and invigorates them.  In other words when we try to protect high quality leaders as if they are a franchise player, we eventually lose them – probably sooner than later.  So the key is to develop them and launch them – much like Jesus did with the disciples.

Which would you rather do:  develop leaders to survive or develop leaders to expand?  I understand the challenge of surviving as it relates to churches.  I hate to see a church close.  That usually means there is one less congregation to make an impact for Christ.  But I am increasingly thinking that anything is better than merely trying to survive because that objective is toxic to the mission and heart of a congregation.

Have you ever tried walking on a 4×4 beam that is suspended above the ground?  The key is not looking down or looking immediately in front of you.  Instead, you want to look about two steps ahead and focus on forward motion.  If you try not to fall, you probably will.  But if you look ahead and keep moving, you can get across the narrow beam.

When we seek to hoard leaders for fear we don’t have enough, we are trying not to fall…trying to survive.  But when we develop leaders to send them out, we are looking ahead and focusing on multiplying impact.

How can you multiply leaders in your congregation or ministry?  I believe the launching point is resolving that you are not multiplying leaders so you have more, but so that the Kingdom has more.  That means loosely holding each new leader you develop so that you can send them out.  Some will stay back and work with you.  And that is good.  But many will launch out in pursuit of a dream that God gives them, perhaps plant a new church to reach a new generation or new demographic for Christ.

“The harvest is plentiful, but the laborers are few; therefore, pray earnestly to the Lord of the harvest to send out laborers into his harvest.”  – Jesus in Matthew 9:37-38 ESV

Will you pray with me?  Will you work with me to this end?

What Apple Can Teach the Church About Disciple-Making 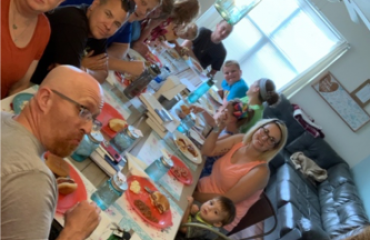